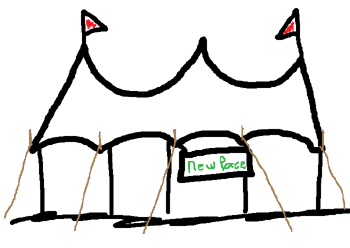 Joshua and I dressed in our best going to a meetin clothes and headed out towards the large tent that was raised earlier in the day. This tent was huge. It looked like an old circus tent. It took a little bit of muscle to get that thing raised. People from all over Bear Country were entering the tent by the time Joshua and I arrived. THE TRIBE members were scattered thru out the crowd being friendly and introducing the people of Bear country to their philosophy of life. I was trying hard not to make faces every time I heard one of them say something stupid.

Joshua and I grabbed a bulletin that was being handed out at the entrance and then took a seat near the back of the tent close to one of the exits. It wasn’t long before the guest speakers arrived or as the THE TRIBE members like to call them Mother and Father.

The room became immediately quiet and then our indoctrination began.