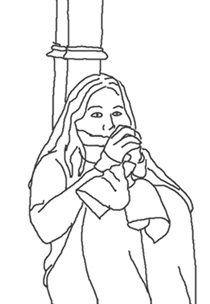 It wasn’t long before I ran out of food in my house. I spent the next days going from house to house scavenging for food. Most of the homes in my neighborhood were empty. The families that lived there left trying to escape the disease. I became really good at breaking into homes. My problem was that other children were also breaking into homes looking for food. It didn’t take long before every house in my neighborhood had been broken into and picked clean. Sometimes I went days without anything to eat. My first friend was Hannah. I met her one day while in town. I was looking for food and trying my best to stay away from the Hyenas. They were a particularly brutal tribe. Rape seemed to be one of their favorite activities. I made a wrong turn and ended up in an alley with only one exit and the Hyenas were close behind. I ducked behind a pile of crates and boxes. I was trying to be quiet and wishing, hoping the Hyenas were far enough behind me that they didn’t see me go into the alley. Someone grabbed me from behind. I almost had a heart attack. It was Hannah. She told me to be quiet. We slid into a cellar. I believe she saved my life that day. For the next few weeks we hung together. Hannah and I had a lot in common. We were both only children, liked the same music and watched the same TV shows. Both of our parents had jobs that kept them in the area during the virus. Hannah lived in a gated community in an apartment with several other children. They helped each other survive. This is where I met Pete and Lisa. One day Hannah and I were out looking for food. We were talking and laughing and not paying attention to what was going on around us. We ran into the Hyenas. It was to late to run. The Hyenas tied us up and dragged us into an abandoned building on Chase street. Hannah was dragged into a back room. I could hear her crying and begging them to stop. I struggled to get free but I couldn’t. Hannah finally stopped crying and the Hyenas came out for me. I was terrified. This was it. I was finally going to die. That’s when Jonas and Matt showed up. My heroes. They beat the Hyenas to a pulp and left a bloody mass of broken bodies on the floor. Hannah died that day. We couldn’t save her. What a waste.